Server Market Analysis Report By Product, By Operating System, By Region And Segment Forecasts From 2019 To 2025

The global server market size was accounted for USD 57.56 billion in 2018 and projected to register a CAGR of 5.4% during the forecast period, from 2019 to 2025. A server is a computer program that provides various services such as communication, data, and access to another computer network. The major factor to drive the market growth is the rising demand for data centers. Companies are replacing existing systems to ensure data storing capacity, system speed, and reliability which is expected to boost the demand for servers. Advent and increasing adoption of advanced technologies including big data and cloud are expected to have a positive impact on market growth. In addition, the rising number of start-ups and OEMs is driving the demand for servers across various sectors. Various new applications that need specific computing requirements from service providers and users are extensively adopting cloud servers for reliable functioning. Thus increasing the number of several applications coupled with advancements in technology like advanced management modules, flash storage, and virtualization is projected to augment the market growth over the forecast period.

To enhance network quality, enterprises are installing cloud servers or virtualization. These servers help organizations to reduce operational and maintenance costs of their IT infrastructures. Physical server needs dissipate heat and floor space, the organization had to invest more for maintenance of data centers along with the cooling systems like air conditioners. Therefore, provisions and visualization like renting servers are gaining popularity among organizations.

The market is estimated to face some challenges, despite technological advancement and the aforementioned advantages, Difficulty in choosing an appropriate server and increasing demand for the customized server is expected to hamper the market growth. In addition, the high cost of maintenance and installation is another challenge for market growth. However, the increased necessity for centralized access systems and centralized access systems coupled with Bring Your Device (BYOD) policy in organizations is projected to drive the market growth from 2019 to 2025.

Several initiatives taken by the government to promote digitalization for e-portals for several activities are boosting the demand for the adoption of IT infrastructure. To connect with government e-portals and to track different government activities, IT infrastructure is mandated. By connecting such portals, people can directly track global and regional developments without any delay or manual work. Thus, digitalization in government services is projected to generate the need for data analysis and storage. These above-mentioned factors are anticipated to drive the market growth over the forecast period.

Based on products, the market is bifurcated into the blade, rack, tower, and microserver. Usually, servers are installed for private data centers and used to perform some applications such as file transfer, web hosting, system collaboration, and e-mails. The product has witnessed advancement in scalability, power consumption, processor, and storage capability in the last few years.

Micros servers are designed for small-scale operations at affordable prices as compared to other servers. Hence, they are primarily adopted by small enterprises. Microservers are expected to have steady growth over the forecast period. On the other hand, the blade server is projected to grow with the highest CAGR from 2019 to 2025, followed by tower servers.

Based on OS, the server market is fragmented into windows, Linux, Unix, and others. In 2018, windows accounted for the largest market share and projected to retain its leading position over the forecast period. This high revenue market share can be attributed to the high adoption of Windows OS in most enterprises. However, the growth of the Windows OS segment is projected to witness steady growth during the forecast period due to the growing adoption of open-source Linux OS.

Linux OS is projected to grow with a CAGR of 7.0% over the forecast period. This growth is attributed to the increasing adoption of Linux OS across various enterprises, as it reduces system costs owing to open source platforms. Also, this OS does not require downtime, as they do not require restart and reboot. This OS offers a wide range of applications including data analytics, web hosting, and proxy without having an additional cost for a software platform that makes it more affordable than Windows OS. 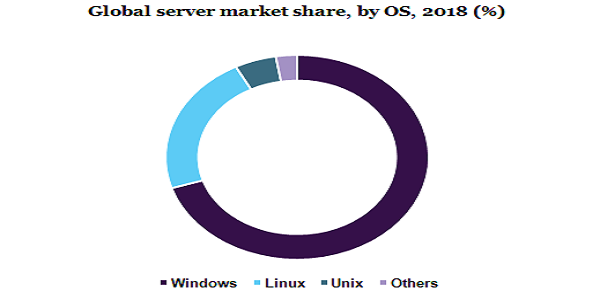 On the other hand, Unix OS is an older version of Linux OS, thus the Unix OS market is projected to decline over the forecast period. Data centers are engaged in updating OS to Linux which is expected to facilitate complex business operations. Windows OS is projected to retain its dominance due to easy availability as compared to Linux OS. However, rising awareness about the benefits of Linux OS is expected to be a challenge for Windows OS growth.

In 2018, North America accounted for the largest market share of more than 30.0% and is expected to continue its leading position throughout the forecast period. Early adoption of server technology is a major factor to contributing the regional market growth. In addition, growing investment by hyper-scale cloud providers and data centers is projected to boost the market growth in North America over the forecast period.

Asia Pacific is estimated to grow with the highest CAGR of over 7.0% from 2019 to 2025. This growth is attributed to the rising penetration of smart devices in this region. Additionally, several initiatives taken by governments for the development of smart city projects have increased the need for advanced IT infrastructure, thereby expected to lead to the development of data centers in the next few years.  Latin America is emerging as a second-fastest-growing region followed by the Middle East & Africa owing to rising cross-border business operations resulted in high adoption of IT infrastructure.

The sudden outbreak of COVID-19 is expected to dampen overall spending on IT infrastructure as companies have to temporarily close down their office infrastructure. This has resulted in a sluggish growth rate. However, to sustain this situation, several businesses are adopting IT delivery models and expedite the adoption of technologies rapidly. During the lockdown, most of the employees are working from home. Therefore, companies are providing remote access to their server by using virtual private networks (VPN). This factor is expected to drive market growth in this situation. Moreover, servers play an important role in the e-commerce industry. People prefer to shop daily essentials from e-commerce portals during lockdowns which are expected to drive market growth. This trend is expected to continue even after we resume normal life, as people are developing confidence in online shopping and also understanding the advantages of using the same. This scenario is projected to surge the server market growth during the pandemic situation.

The market is highly competitive and leading players have dominated the market, in 2018. Rising demand from customized servers from enterprises has resulted in higher Average Selling Prices (ASPs) for the products. In addition, enterprises are buying servers with high configurations and are highly-priced.

The key players include in this market are Dell Technologies Inc.; IBM Corporation; Inspur Technologies Co. Ltd.; Oracle Inc.; Hewlett-Packard Corp.; Microsoft Corporation; Huawei Technologies Co., Ltd.; and FUJITSU. The key players are expanding their business in the Asia Pacific due to the presence of emerging countries for digital technology. The region is expected to have potential growth due to the increasing penetration of digitally compatible devices such as smartphones and wearable devices. Moreover, increasing broadband connection is creating a need for the adoption of IT infrastructure to enhance decision-making and manage critical business activities.

Following are the prominent players operating in the server market:

The report forecasts revenue growth at global, regional, and country levels and provides an analysis of the latest industry trends and opportunities in each of the sub-segments from 2015 to 2025. For this study, Million Insights has segmented the global server market report based on product, OS, and region: